Californians fleeing their state might vote for the same failed policies in their new home of Arizona. If so, Mark Kelly is their guy. Arizonans who view the basket case to our West as a cautionary tale need to think twice.

[I]f the past is prelude, a Senator Kelly will push Sacramento and Seattle laws on the freedom-loving voters of Arizona.

The biggest takeaway here: Mark believes that Arizona should be more like liberal bastion California.  As Jon notes, Mark rated California’s gun laws with an “A,” while giving Arizona an “F.” 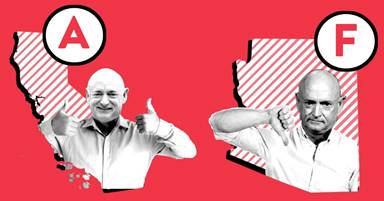 That Mark wants to model Arizona after California is disturbing and is sure to raise alarm bells for voters who are waking up to the fact that he’d be Chuck Schumer’s 51st vote for the most radical agenda in American history.