Happy Sunday, folks! Today marks 16 days until the most consequential election of our lifetime.

Senator Martha McSally was busy last week, crisscrossing the state and talking to Arizonans about the key issues at stake in this election. No one is more accessible or working harder for the people of Arizona than Martha.

This week she campaigned in Phoenix, Tucson, Mesa, Scottsdale, Sun City, Chandler, Eloy, Casa Grande, Queen Creek, Goodyear, Gilbert, Apache Junction and Glendale. As ballots are being cast around the state and we enter the final stretch, it is clear Arizonans are energized and excited to send Martha McSally back the Senate.

Check out a re-cap of our busy week on the trail:

On Monday, Ambassador Nikki Haley joined Martha on the campaign trail in Phoenix.

“I want to know that we’re going to send a Senator from Arizona to D.C. that understands that China is a national security threat, not someone who wants to hold their hand and figure out how to get them to invest in his company” said Ambassador Haley.

“It’s not what (McSally) said its what she’s done she’s fought for you every day and now it’s time to fight for her,” Haley said to cheers from the crowd. 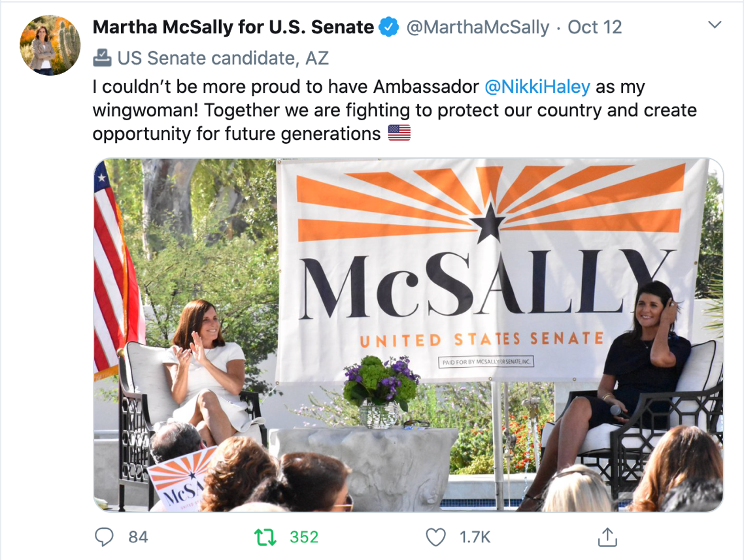 On Tuesday, the National Border Patrol Council endorsed Martha because of her unwavering support for our border patrol agents, securing our border, and keeping Arizona safe. 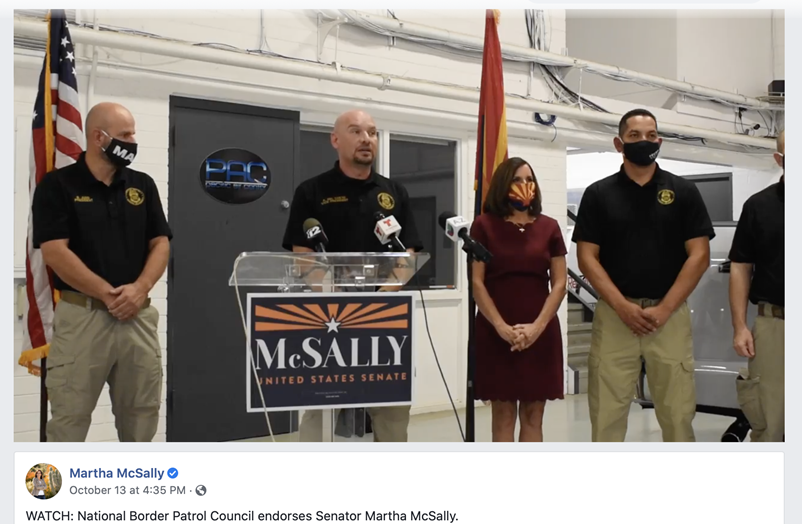 Later that night, she made stops in Chandler and Gilbert… 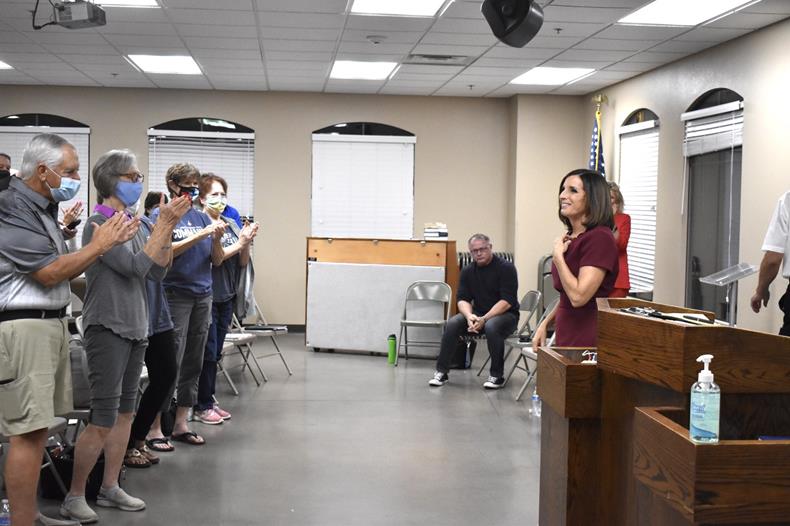 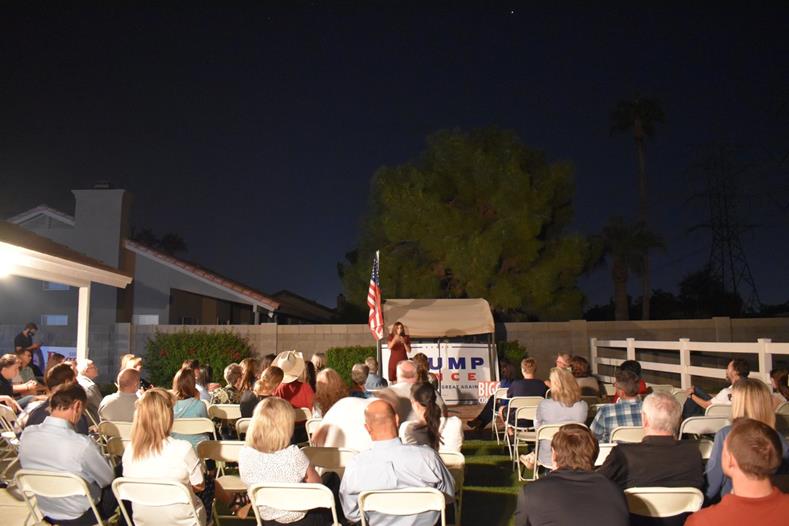 On Wednesday, Martha joined Donald Trump Jr. on the trail to rally voters in Tucson, and talked to voters in Eloy, Casa Grande, and Queen Creek.

“We had a strong economy before this pandemic hit,” McSally told the audience. “We cut your taxes, we are rebuilding our military, we are securing the border, we are protecting your constitutional rights and the sanctity of life, and we are ensuring we are defending the police, not defunding the police.”

McSally reminded the crowd that “Arizona is ground zero. We are ground zero to make sure President Trump gets four more years. He is counting on us.” 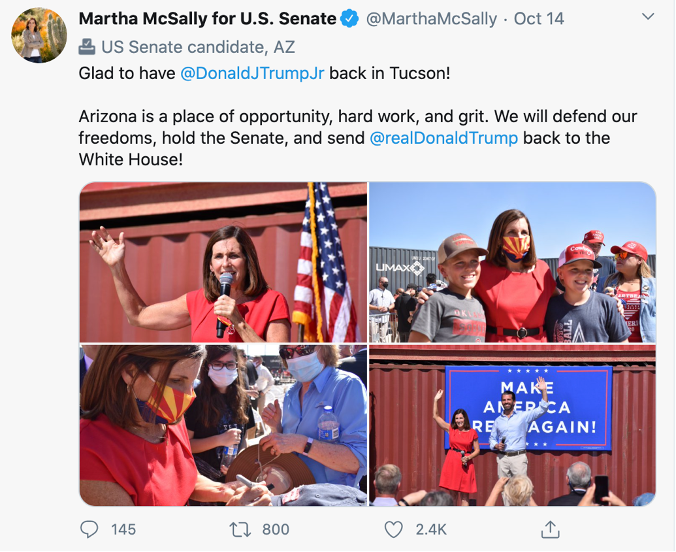 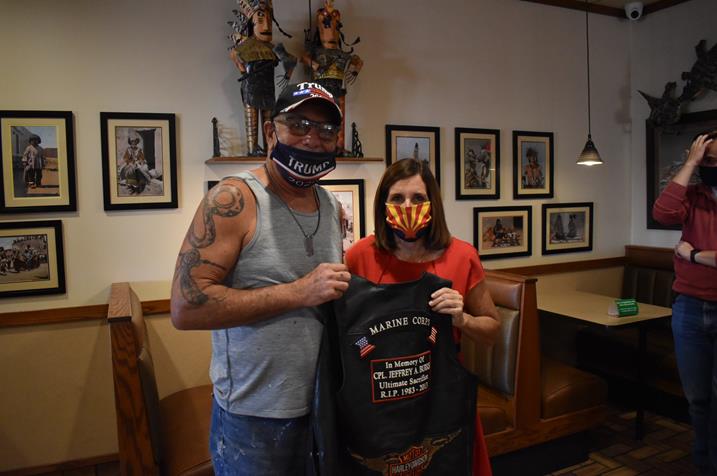 “We’re ground zero for Trump to get four more years,” McSally said. “This is all about the Left trying to get power and they can’t do it without Arizona.”

She said that the current version of the Democratic Party is much more extreme than past versions. The Democratic Party is trying to appeal to moderates and independents but if its representatives get into office, especially Congress or the presidency, residents can expect a radical left agenda that may include Medicare for All, gun control and more regulation.

“We have to fight for every last vote,” she said. “Biden’s not a moderate. The radical Left has taken over the (Democratic) party.”

McSally said she and the Republican Party, including President Donald Trump, have a record of delivering their promises to Arizonans and Americans. She pointed to recent tax cuts for middle class families and pointed out that household incomes and savings were up across all demographics. She and the Republican Party wanted to continue to meet those promises including more tax cuts, bringing home jobs from China, finishing the border wall, making sure troops received the funding and support they needed and confirming U.S. Circuit Court of Appeals Judge Amy Coney Barrett to the U.S. Supreme Court.

She capped off the day with a tele town hall with Arizona GOP Chairwoman Kelli Ward, where she talked about the stakes of the election and getting out the vote. 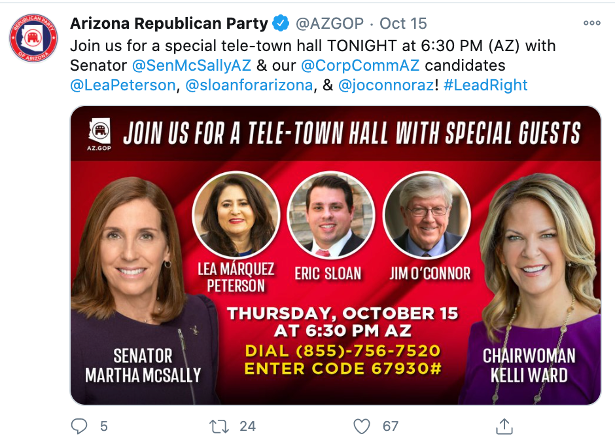 On Thursday, Martha rallied volunteers as she cast her ballot at the Pima County Recorder’s office in Tucson. She encouraged Arizonans to turn in their ballots as soon as possible and stressed the importance of voting in this consequential election. 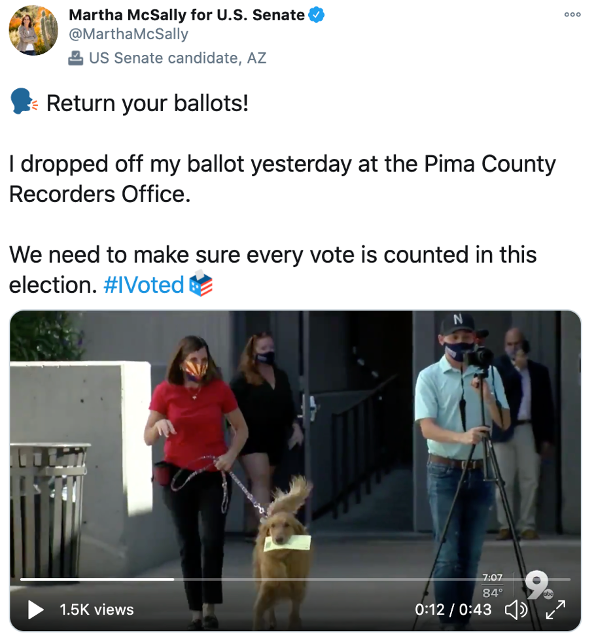 Later that day, she joined Don Jr. again for an event with members of the LDS community in Mesa.

Sen. Martha McSally, R-Ariz., who is trailing Kelly in statewide Senate polls, spoke in Mesa ahead of Trump Jr.

McSally lauded Trump’s Supreme Court nominee, Amy Coney Barrett, as an “amazing” woman. McSally emphasized the importance of Arizona in both the Senate and presidential races.

“It is all up to us,” she said. “This is ground zero to make sure that (President Trump) gets four more years in the White House.”

Among other things, Don highlighted a story that broke this week about Mark Kelly hiring a spokesman that had one week prior posted a disgusting, profane anti-police message on Twitter. 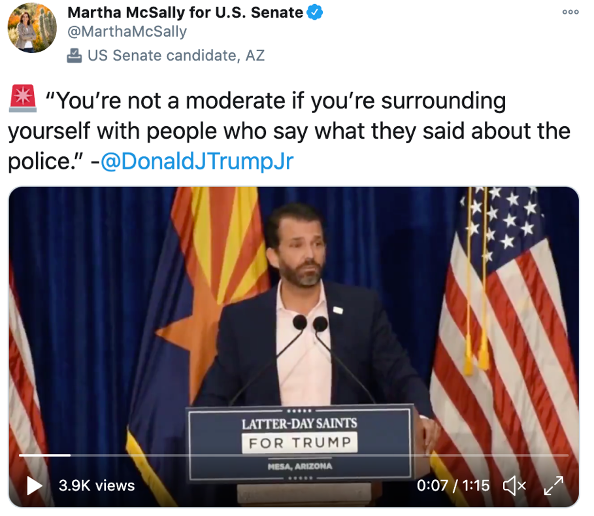 On Friday, Martha met with volunteers and voters in Phoenix, Sun City, Glendale, and Goodyear. She spoke at a special meeting with the Phoenix chapter of Log Cabin Republicans. 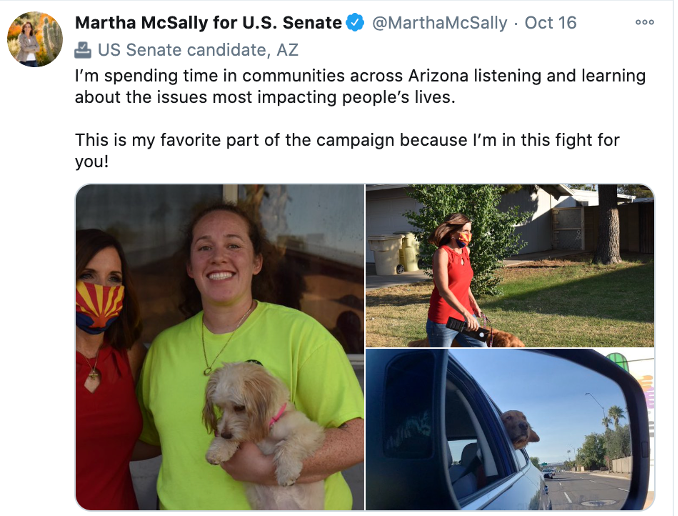 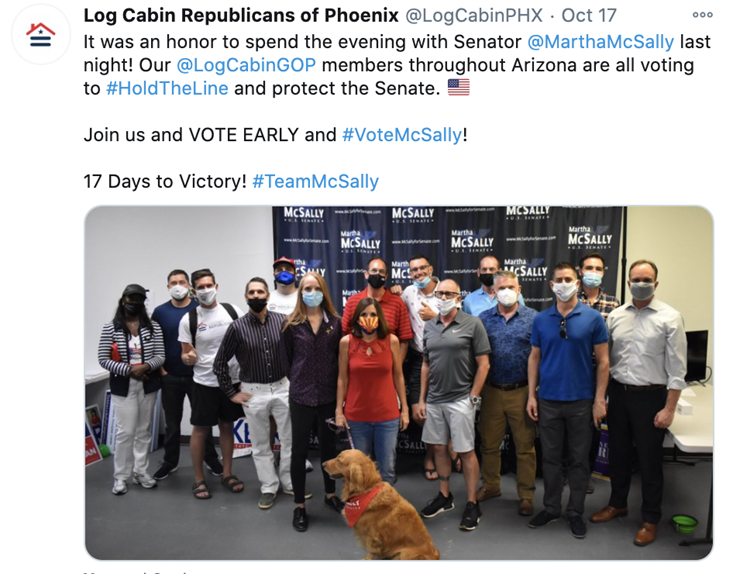 On Saturday morning, Martha rallied young conservatives in the East Vally and talked to voters in Apache Junction before heading back to Queen Creek for a Freedom and Family rally. 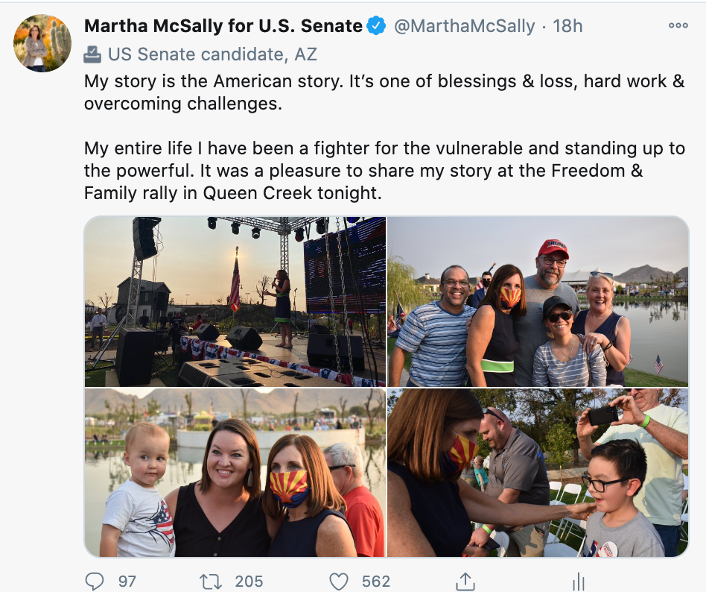 She capped off the week by spending the morning at The Trinity Church in Scottsdale. She shared her faith journey and worshipped with the congregation. 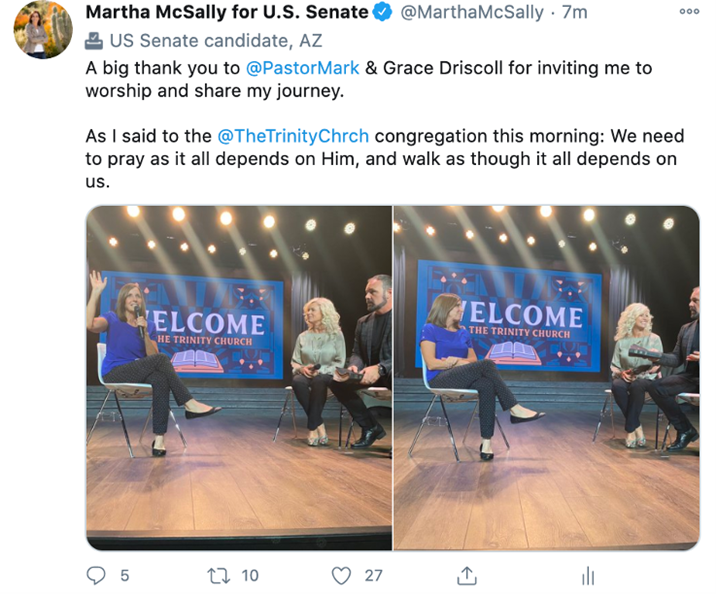 In Case You Missed It…

WATCH: Senator McSally was on Hannity this week to talk about her race, Mark Kelly’s concerning ties to China, and his acceptance of extreme anti-police rhetoric.
She also joined Fox10 and the Daily Caller for discussions about her bipartisan record of results, her priorities for another term, and the issues that are top of mind for voters as they cast ballots.